Financing the social and ecological transition: International call for the civic requisition of chairs!

Financing the social and ecological transition: International call for the civic requisition of chairs! 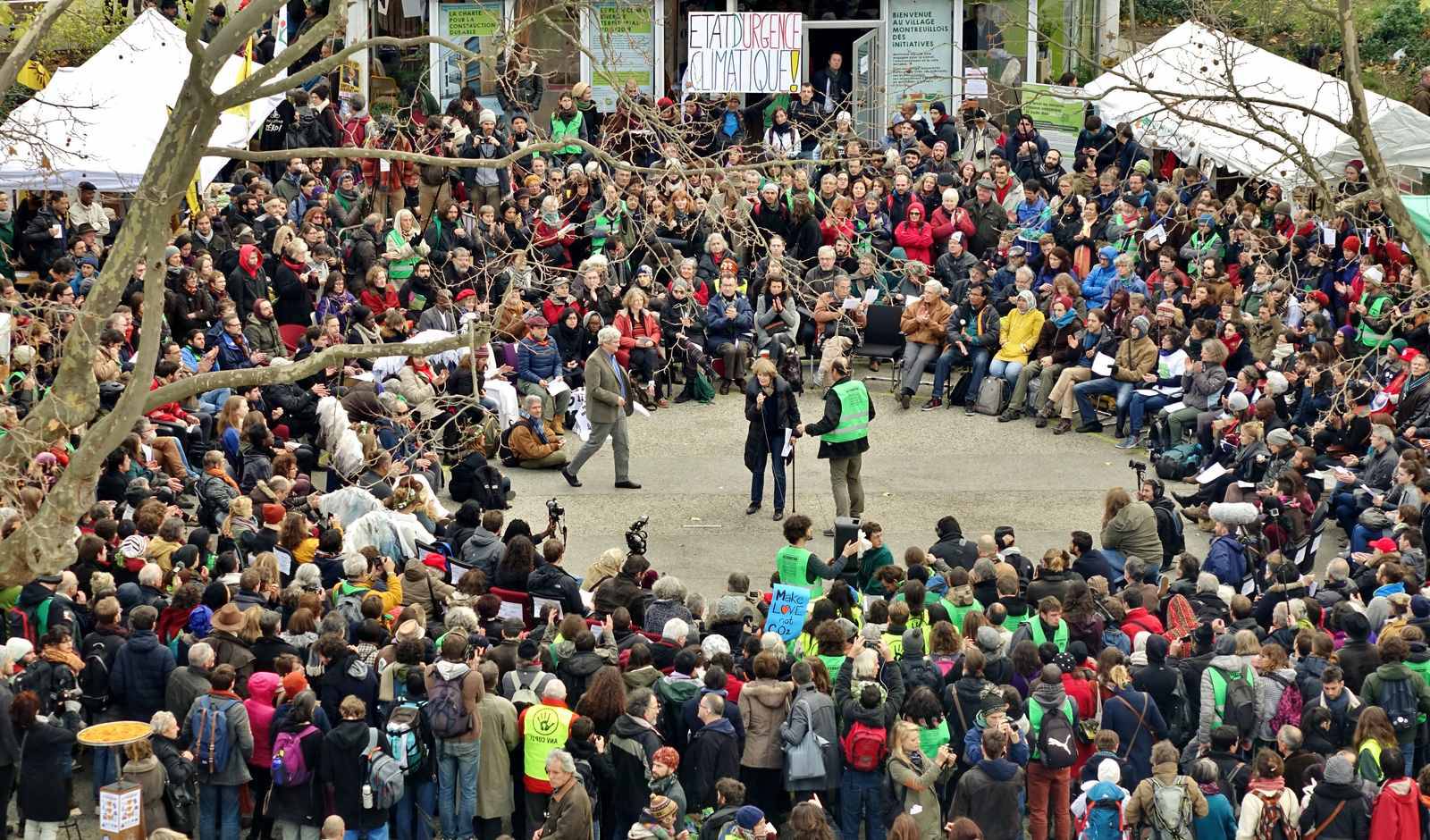 International call for the civic requisition of chairs

Tax havens are a black hole of global finance where at least 20 trillions of dollars vanish (according to Tax Justice Network). While global negotiations on climate are stalled on the question of financing the fight against climate change, letting such massive tax evasion of public money go on is not only irresponsible but criminal. Tax havens lie at the heart of the global crime economy in all its forms: drugs, weapon trade, terrorism, money laundering.

It is with the aim of take this issue from the specialized sphere of experts to the general public that a symbolic non-violent movement was born in Basque country, protesting tax evasion organized by the bank HSBC. It has then spread to France, Belgium and Switzerland and to all banks involved in tax evasion. 196 chairs were requisitioned in bank branches by the “Chair reapers” to reveal the link between tax evasion organized by banks and lack of funding for climate, in particular the annual 100 billion of dollars promised from 2020 to developing countries for climate adaptation. 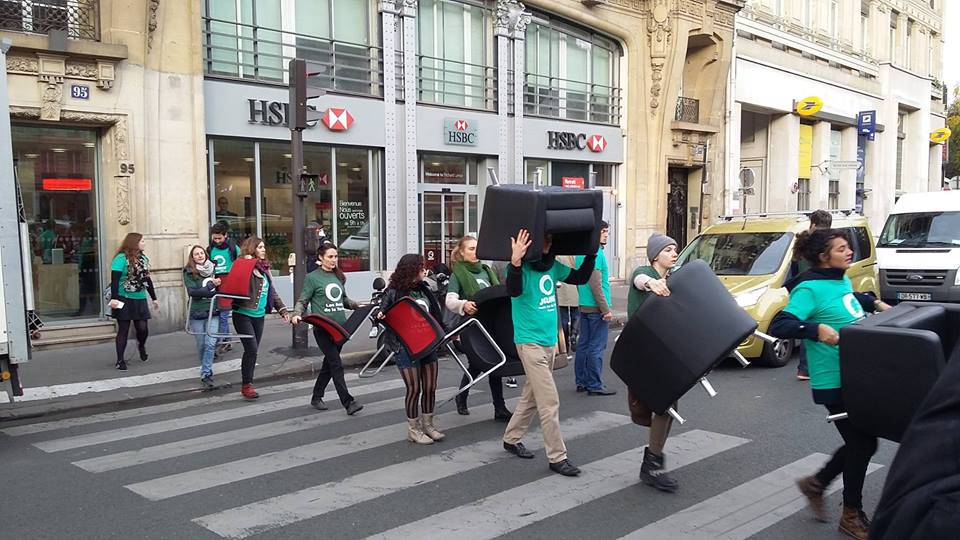 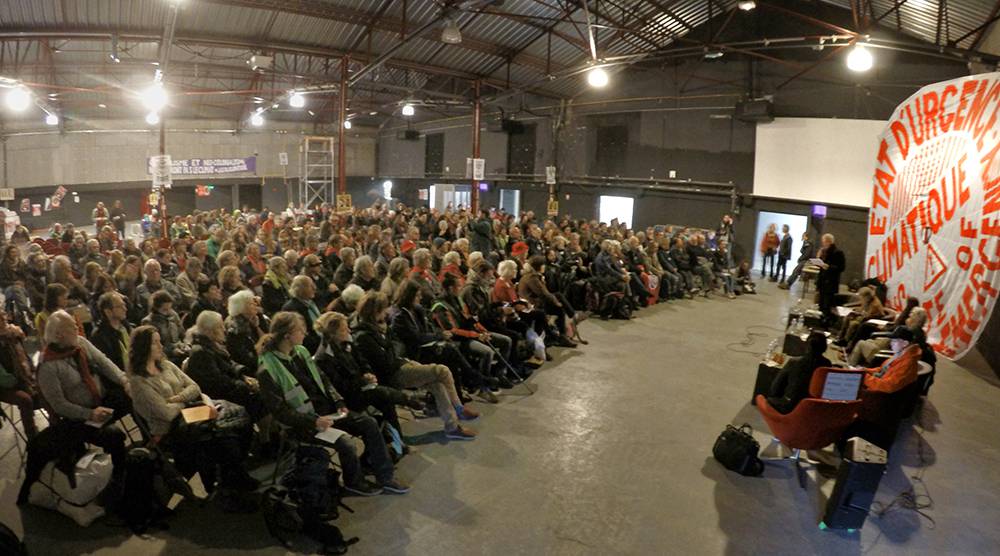 This non-violent civil disobedience movement aims to force cheaters and tax evaders to respect the needs to contribute demanded by all citizens. It is now going to grow on the international level.

Personalities like Marcos Arruda (economist from Brazil), Hindou Oumarou Ibrahim (coordinator of the Association for Indigenous Women and Peoples of Chad), Anabella Rosemberg (trade unionist),Yeb Saño (Filipino negotiator at COP 21), Txetx Etcheverry (Alternatiba), Susan George and other spokesperson from the five continents will proclaim the “peoples’ solutions for financing the transition“: financial transaction tax, carbon tax, debt restructuring, quantitative easing for the people and the planet, disvestment from fossil fuels, etc… (See below.)

It is in this spirit that we call to all civic movements worldwide to use this simple, non-violent and creative method in order to place the issue of tax evasion and tax havens at the heart of the global public debate, and to finally obtain the implementation of measures often announced but regularly silenced under the pressure of finance lobbies. 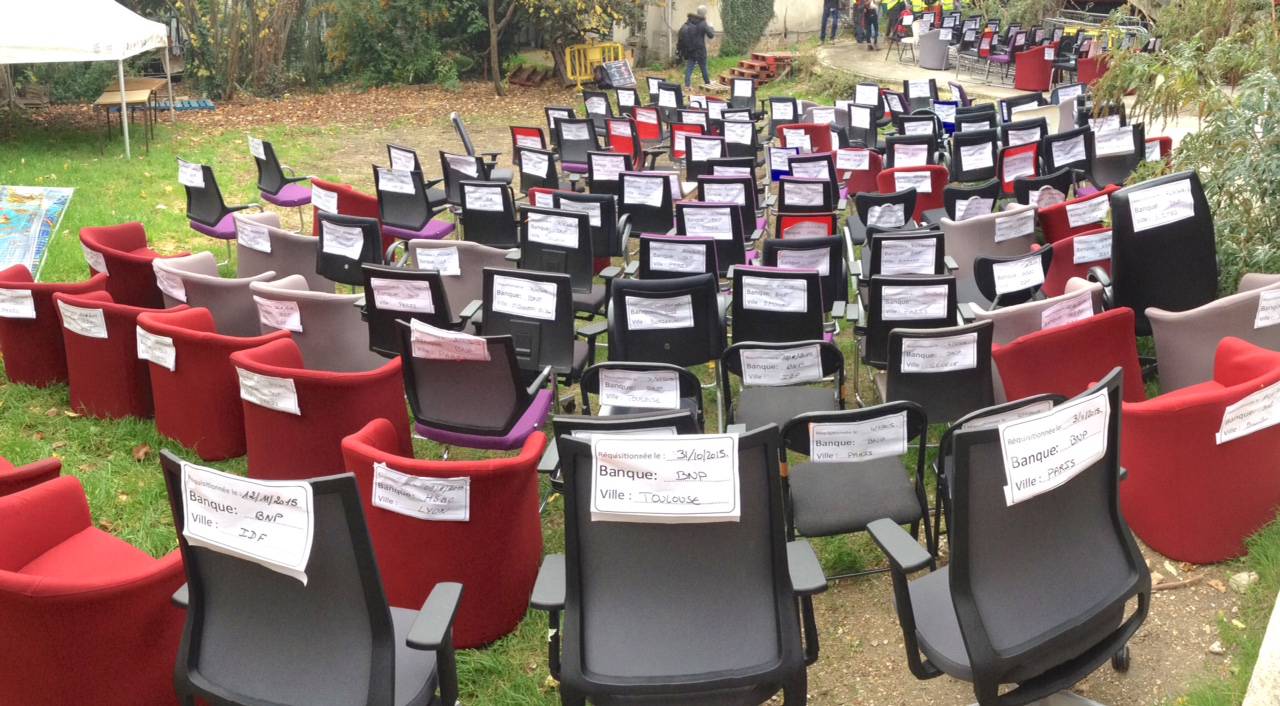 “People’s solutions for financing the transition”

Our planet is burning and governments are looking away. Climate change is already a tragedy for millions and threatens life as we know it on this planet. Yet the 196 parties of the Paris Climate Conference are unable to find additional $100 billion a year to fund the Green Climate Fund. And much more is needed.

But we, from social movements throughout the world, we know where is the money to finance a clean future.

We need to stop tax evasion in order to increase fiscal revenues of national states. We also need to stop the money that goes to criminal and terrorist activities.

Right now, we want all countries and their dependent territories to create public registries of the real beneficial owners of companies registered in their territory.

Just after that, we want all countries to fully comply with the new global Common Reporting Standard for automatic information exchange on bank accounts.

Today we launch the international call for action “Chairs for climate justice” against banks that deal with tax havens.

We need to alleviate the burden of debt on public budgets. We also need to end with the domination of financial markets and banks over democratically elected governments.

Right now, we want a 100% cancellation of multilateral debts as part of the total cancellation of debts claimed from the South, without externally imposed conditionalities.

Just after that, we want Citizens Audits of public debts and restructuration / cancellation of illegitimate and/or unsustainable debts.

We need to fund international action against poverty and climate change. We also need to discourage financial speculation and carbon emissions. And we need to prevent social and ecological dumping.

Right now, we want a Global Financial Transaction Tax with large scope and no loopholes.

We need to reduce toxic public spending and harmful private investment, in order to free resources for renewable energies.

Right now, we want the end of fossil fuel subsidies without hurting the poor.

Just after that, we want all financial actors to divest themselves from fossil fuels.

We need to fund private and public projects for decarboning the economy and create climate jobs by the millions. We also need to make banks accountable to civil society and the public.

Right now, we want Central Banks to do quantitative easing not for private banks but for the people and the planet. We want public and private banks to stop financing fossil fuels.

Just after that, we want a democratic governance of banks by their stakeholders.

There will be no peace without climate justice.