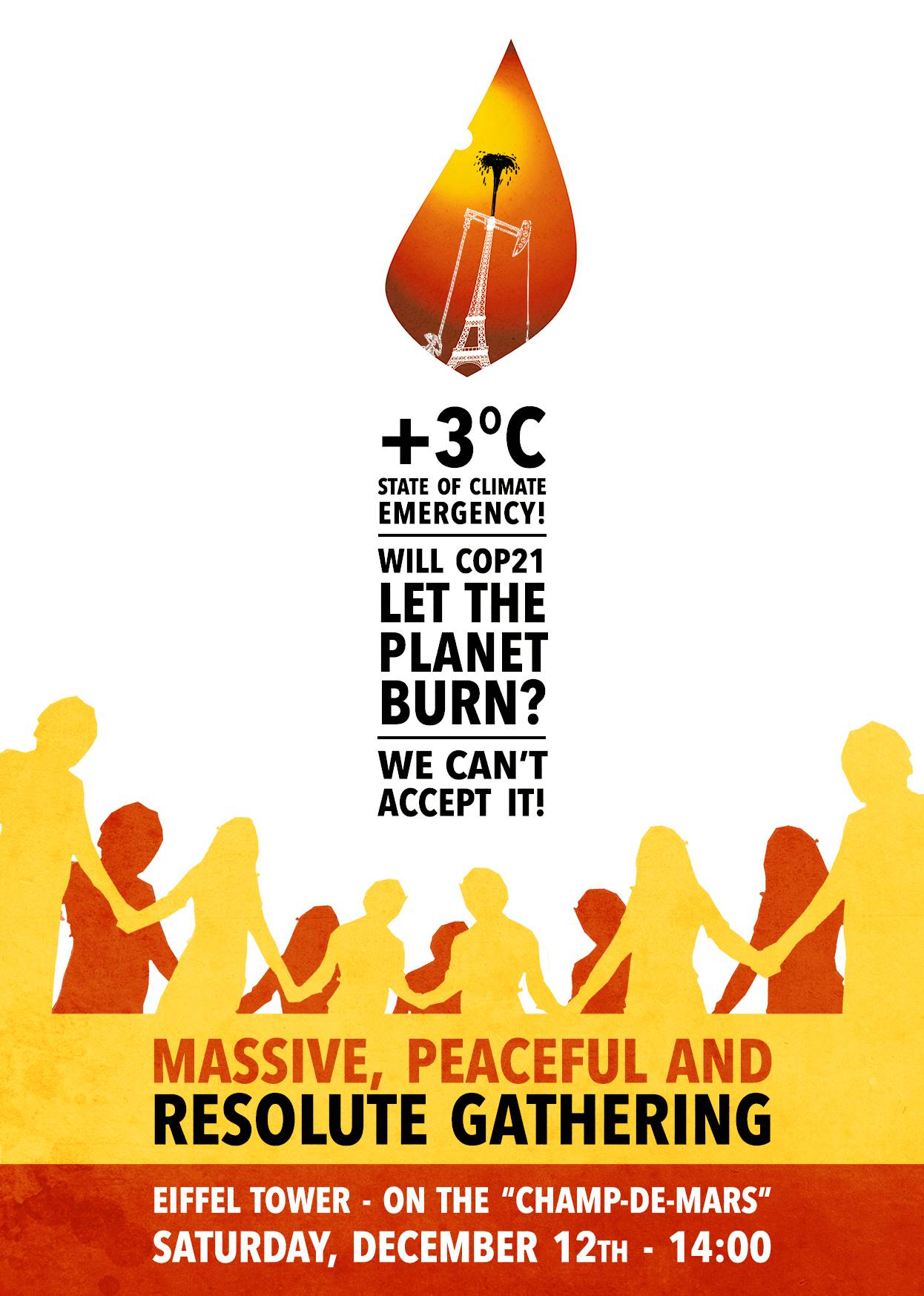 We ask you to sign and share the petition calling to this gathering and to massively join us next Saturday in Le Champs de Mars under the Eiffel Tower.

Mobilized to tackle the climate emergency and the need for social justice, to support the struggles against all forms of domination, and to help the impacted populations, we are extremely worried about the current state of COP21 negotiations.

As decided in 2011 in Durban, the COP21 term of reference is to reach a global agreement allowing to stabilize the average global temperature below +2ºC by 2100. After one week of negotiations, everything indicates that COP21 negotiators are failing to answer this essential term of reference. Conversely, the country greenhouse gas emissions reduction pledges would induce an average global temperature increase of 3ºC, which would irreversibly drive us into climate chaos. The lack of legally binding commitments on global greenhouse gas emission reduction pledges between 2015 and 2020 in the draft agreement confirms that COP21 will lead to a global temperature increase higher than 2°C.

Without radical changes, the COP21 agreement will implicitly allow a global crime against humanity.

Besides, the lack of funding to support the adaptation of the most vulnerable populations and countries to climate change will even-more increase the future climate change casualties.

The leaders of the world, namely from the Northern countries that are historically responsible of the climate crisis, are not equal to the ambition we need to espouse to tackle the current climate challenge. However, climatologists tell us that we have only a few years left to act on climate change to prevent climate chaos.

We cannot accept the unacceptable! We have to sound the alarm to inform the people of the world on the state and possible outcomes of the climate negotiations. First, we invite everybody to massively adopt and support alternative, sustainable and solidarity-based lifestyles and actions, to help alleviating current disorders. Then, we are calling for a massive and constant citizen mobilization in the following years, to relentlessly call on political and economic leaders to push forward true solutions to climate issues.

As a starting point, we declare the state of climate emergency and call for a mass citizen gathering under the COP21 symbol on Saturday, December 12 at 14:00, in the Champ de Mars, under the Eiffel Tower. We are going to form large human chains and carry climate emergency and call to action messages to the people of the world. We will demonstrate with discovered faces, to stress the strictly non violent nature of our action.

Let’s meet on Saturday under the Eiffel Tower to declare the state of climate emergency!